Hi everybody, I'm migrating my blog to https://patitsas.github.io/blog/ to take advantage of the simplicity of blogging with hexo. RS...

CS grades: probably more normal than you think they are

It's commonly said that computer science grades are bimodal. And people in the CS education community have spent a lot of time speculating and exploring why that could be. A few years back, I sat through a special session at ICER on that very topic, and it occurred to me: has anybody actually tested if the grades are bimodal?

From what I've seen, people (myself included) will take a quick visual look at their grade distributions, and then if they see two peaks, they say it's bimodal. I've done it.

Here's the thing: eyeballing a distribution is unreliable. If you gave me some graphs of real-world data, I wouldn't be able to tell on a quick glance whether they're, say, Gaussian or Poissonian. And if I expected it to be one of the two, confirmation bias and System 1 Thinking would probably result in me concluding that it looks like my expectation.

It's quite common for normal distributions to have two "peaks", due to noise in the data. Or the way the data was binned. Indeed, the Wikipedia article on Normal distribution has this histogram of real world data that is considered normal -- but has two peaks: 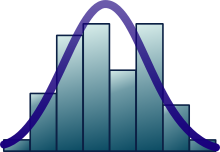 How do you test for normality vs bimodality?

There are a bunch of ways to test whether some data are consistent with a particular statistical distribution.

Another way is to use a pre-established statistical test which will allow you to reject/accept a null hypothesis about the nature of your data. I went this route, for the ease of checking hundreds of different distributions and comparing them.

There are a large variety of tests for whether a distribution is normal. I chose Shapiro-Wilk, since it has the highest statistical power.

There aren't as many tests for whether a distribution is bimodal. Most of them work more or less by trying to capture the difference in means in the two distributions that are in the bimodal model, and testing whether the means are sufficiently separate. I used Hartigan's Dip Test, because it was the only one that I could get working in R #OverlyHonestMethods.

I also computed the kurtosis for every distribution, because I had read that a necessary but not sufficient condition for bimodality is that kurtosis < 3. When you do thousands of statistical tests, you're gonna have a lot of false positives. To minimize false positives, I only used Hartigan's Dip Test on distributions where the kurtosis was less than 3. I set my alpha value at 0.05, so I expect a false positive rate of 5%.

Next I applied Hartigan's Dip Test to the 323 classes which had a kurtosis less than 3. For this test, the null hypothesis is that the population is unimodal. As a result, if p is less than alpha, then we have a multimodal distribution. This was the case for 45 classes (10% of those tested, 5.8% of all the classes).

For the 86.4% of classes where we failed to reject the null hypothesis, we can expect but not guarantee due to type II error that they are normal. I've got a large sample size, and good statistical power. From bootstrapping a likely beta value, I estimate my false negative rate is around 1.48%.

Bottom line: An estimated 85.1% of the final grades in UBC's undergrad CS classes are normally-distributed. 5.8% of the classes tested as being bimodal, which isn't a whole lot more than the false positive rate I'd expect to see (5%).

I couldn't get my hands on a similar quantity of data from my home institution (U of Toronto). But every U of T class I could test was normally-distributed (n=5). Including classes that I'd taught, where I'd eyeballed the grades, and then told my colleagues/TAs/students that my grades were bimodal. Oops.

Since I thought CS classes were bimodal, when I looked at my noisy grades distributions, I saw bimodality. Good old System 1 Thinking. Had I taken the time to fit my data, or statistically test it, I would have instead concluded it was normally-distributed.

I'm currently reading Stephen Jay Gould's The Mismeasure of Man, and this part stuck out for me: "Statisticians are trained to be suspicious of distributions with multiple modes." Where you see multiple modes, you're likely either looking at a lot of noise -- or two populations are improperly being sampled together.

Why are CS distributions so noisy? My colleague Nick Falkner recently did a series of blog posts on assessments in CS classes, and how they're so truly ugly. And my colleagues Daniel Zingaro, Andrew Petersen and Michelle Craig have written a couple of lovely articles which together paint a story that if you ask students a bunch of incremental small concept questions, rather than one giant all-encompassing code-writing question, you get grades distributions which look more normal. How we assess our students affects what sort of distribution we get.

Perhaps once we as CS educators figure out better ways to assess our students, our grades distributions won't be quite so noisy -- and prone to miscategorization?
Posted by Elizabeth Patitsas at 2:25 PM